The South American capybara, Hydrochoerus hydrochaeris, is the world’s largest living rodent. It can weigh up to 140 pounds, but what’s really interesting is that it bears a striking resemblance to Mr. Spock from Star Trek. 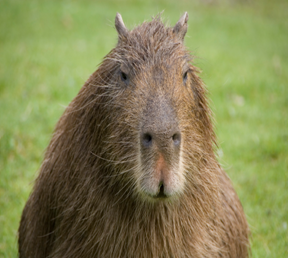 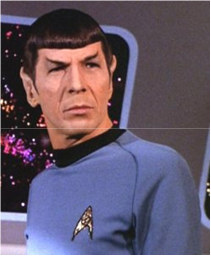 Luckily for everyone involved, capybaras are herbivores, a fact that offsets the discomfort with both their size and their genetic ties to the rodentia crime family. Plus, the really horrifyingly large rodents are long gone: in early 2008 the BBC, fresh out of news, reported that a fossilized skull belonging to Josephoartigasia monesi (two to four million years ago, give or take a few minutes) was recently found in Uruguay. Some scientists estimate this rodent species would likely have been about 5 feet tall, 10 feet long and weighed up to 2200 pounds. Some other scientists speculate that it probably also had atrocious gas. Long story short, good luck getting a dead one of those out of your storm drain. 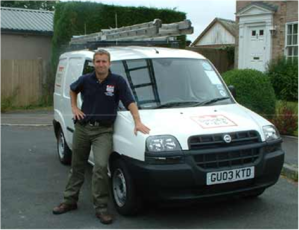 But J. Monesi is long since extinct (thank you, Saber Toothed Tiger) leaving the capybara as the poor man’s freakishly large rodent.

Today, capybaras can be found in the wild throughout most of the South American continent, where they spend their days annoying the daylights out of ranchers with their competitive grazing.

When not being nuisances, their skin makes nice leather and their meat apparently resembles pork. If you need any other reason to see one (you really don’t), they also have webbed feet that allow them to swim like the dickens, and they can hold their breath for five minutes (give or take two million years). This is why, in South America, they say, ‘Check your pool before you go swimming, because there might be a capybara in there holding it’s breath, waiting to scare you.’ This sounds much more profound in Spanish. 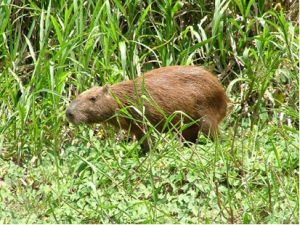 Como estas? Capybaras often use the formal form of the verb estar incorrectly…

The name ‘capybara’ comes from Guarani, a language of indigenous people in South America. It means ‘master of the grasses,’ which does little to dispel the stereotype that indigenous people tend to overstate things. Meanwhile, the capybara’s Greek name, Hydrochoerus hydrochaeris, means ‘water hog.’ Guess which nomenclature scheme these animals prefer.

Let’s skip gestation periods and social interaction and say this: the capybara deserves a little credit for refusing to scurry into the trash can when people turn on the lights. Instead, at 140 pounds of rodent, the capybara has really embraced the whole ‘being a rat’ thing. If criminals followed their lead, we’d have much less crime. What’s more, they’re not ashamed to do their Mr. Spock impression.