Despite what you learned in your very first dinosaur book, the Pterodactyl was not a dinosaur. Dinosaurs (at the time of this writing, at least) are defined as land-dwelling, diapsid reptiles that descended from the archosaurs. While this definition is certainly annoying (i.e. in order to get a grip on the whole affair one is now forced to look up “diapsid” and also “archosaur” and thus one quickly starts imagining other things one could be doing with one’s time), it is the accepted definition of dinosaur. Since Pterodactyls flew, they were not “land-dwelling” and are therefore not considered dinosaurs, even though they were large reptiles who lived with the dinosaurs and looked like the dinosaurs and played racquetball with the dinosaurs on Wednesdays.

Plus, Pterodactyls walked with a certain semi-upright stance that differed slightly from the stances of “real” dinosaurs. Paleontologists, it turns out, are total sticklers. 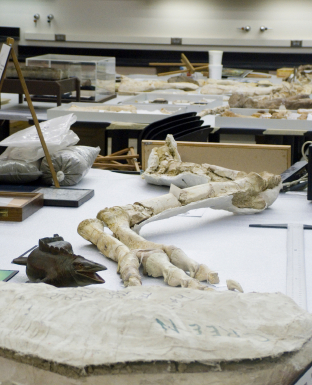 Put a metatarsal on the metacarpal table and get ready for an earful.

The second, more immediate problem with putting the Pterodactyl in dinosaur books is that there is (was) no such animal.  The term “Ptero-dactyle” was first coined by French Naturalist/Zoologist Georges Cuvier in 1809. Around that time, science had been turning up some bizarre fossils with beaks and large, wing-like structures. For some reason, to Cuvier, a hyphenated name beginning with a silent P seemed like an awesome way to describe these organisms. Eventually, “Ptero-dactyle” became “Pterodactylus,” and every fossil with wings that looked like a dinosaur was tossed into the old metaphorical Pterodactylus bucket in the corner. However, the term Pterodactyl stuck in the vernacular because the public, for one, had had enough already and just wanted to see the exhibit and go home.

Eventually, science got its act together and renamed the entire group of flying reptiles “Pterosaurs” (from the Greek meaning “wing lizard”). Each was then given a proper scientific name. Today, we recognize only two Pterodactylus species: Pterodactylus antiquus and Pterodactylus longicollum. And just FYI, knowing this simple fact officially makes you a nerd.

Long story short, there is no “Pterodactyl.”

Now that we’ve got all that sorted out, what you really need to know about Pterosaurs is that they were an order of terrifying, flying, carnivorous reptiles that dominated the skies of the Jurassic and the Cretaceous. The smallest was about the size of a sparrow, while the largest, Quetzalcoatlus, had a tip-to-tip wingspan that reached up to 40 feet, which is equivalent to that of your average fighter jet. Quetzalcoatlus wasn’t just the biggest of the Pterosaurs. And it wasn’t just the biggest thing to ever poop on a T. Rex. 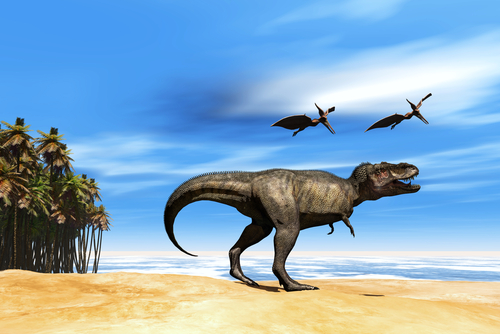 Quetzalcoatlus, according to scientific consensus, was the largest animal that ever flew. Who needs Pterodactyls anyway?

It’s probably also important to know that present-day birds share many flying-specific features with Quetzalcoatlus and Pterosaurs in general (relatively small bodies/hollow bones for lightness and large brains/good eyesight for, you know, not crashing) but present-day birds did not evolve from Pterosaurs. Of this much, science is very close to absolutely sure. It’s rare when you get certitude like that from scientists, the very same people who will tell you that a particularly good movie or book or Super Bowl party is “consistent with being enjoyable.” So revel in this almost-truth: Pterosaurs did not evolve into birds. Like everything else that ended in –saur, they were wiped out by an asteroid (or a super volcano, or something). Birds gradually evolved from the small, land-based animals that survived the event.

The fact that Pterosaurs and pigeons have similar adaptations for flight is a nice example of what scientists call convergent evolution: Two unrelated animals evolving similar features to tackle a certain problem (flight), without once getting on conference call to make sure “everyone was on the same page.” Perhaps it makes sense that some challenges in nature yield predictable results, regardless of time or place. After all, one probably wouldn’t be surprised to find a bank on a civilized alien planet that has some sort of transparent-yet-high-security wall between its tellers and its customers. That alien bank, if its still around, no doubt also learned that giving volatile, adjustable-rate mortgages to their alien customers  with insufficient income to support their monthly payments was just a terrible idea. Convergent evolution at work.

Okay. Anyway. Back to Pterosaurs. In summary, a flying lizard as big as an airplane is undeniably cool. Unless you just got your T. rex washed.