Alternately known as the horned rattler, the sidewinder rattler, and Gary, the sidewinder rattlesnake (Crotalus cerastes, lit. ‘Have you seen this thing move????’) is a relatively small rattlesnake found in the desert covering eastern Arizona, southeastern California, southern Nevada, and the southwestern corner of Utah. Ranging in size from just over a foot to two and a half feet, the sidewinder is a triumph of American engineering and can-do ingenuity whose method of locomotion across hot and shifting desert sands of the southwestern United States1 (and its infrared sensory organs) made it a perfect model for the premiere short-range air-to-air heat-seeking missile in the US arsenal. 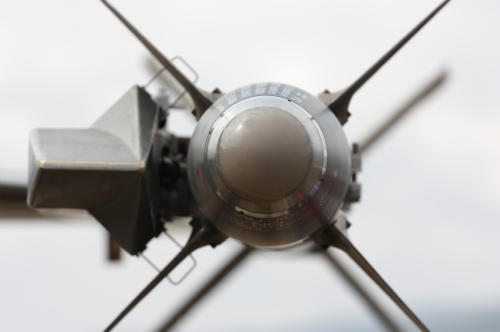 ‘You know this missile actually started out as a snake, Private?’

The sidewinder rattlesnake exhibits two modes of travel: normal, regular straight-line slither and a truly amazing side-slipping S-shape that powers it quickly over low-traction desert sand while minimizing contact with sweltering silicon. Minimizing energy use, only two points of its body touch the ground at a time. The resulting movement is nearly-hypnotic, having entranced generations of settlers and ranchers who quickly came up with an apt and scary-sounding name for their new neighbor. 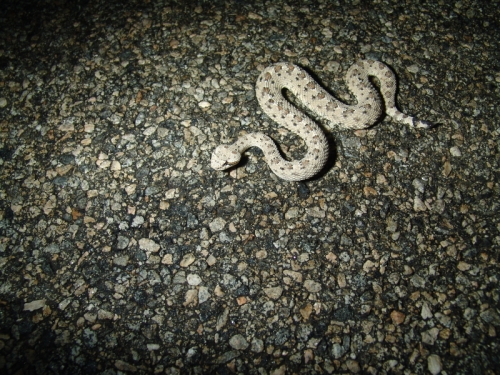 ‘Show of hands for ‘Joey McSlitherWeird’? And then for ‘Sidewinder’? OK, Sidewinder it is.’

The resulting ‘J’ pattern left behind in sand covered by a sidewinder is one of its distinguishing features. Other features distinguishing it include supraocular scales that give the appearance of horns, added to keep sun and sand from the sidewinders eyes. It can also survive without any water (it gets its supply from its prey of small desert animals). Additionally, females are usually larger than males (unusual among rattlers), and its small size combines with a relatively weak venom to pose only a small threat to human bite victims. Though one report included a story of a man bitten by a single fang of a sidewinder on his finger and quickly treated with antivenom, but within three hours his arm was swollen beyond belief and the pain was described ‘as if the arm had been boiled in oil.’ So it’s probably best to learn to move sideways across the hot desert from a correspondence course.

1 Though it is important to note that the sidewinder also inhabits parts of Mexico, and no Ken Burns special would be complete without acknowledging the many contributions of Mexican and Mexican-American NASA employees to the production of the sidewinder rattlesnake.